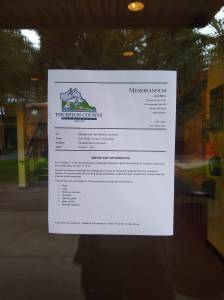 *Names have been changed

“I was walking back into Spangler and I saw a sheet of paper on the door,” according to a student named Joe*. Students residing in Spangler Hall may notice something slightly different when they go back to their residence hall today. A sheet of paper described by Joe was a notice from Thurston County that Spangler Hall now qualified as a farm.

According to Ronald Cannon, who works for the Thurston County Department of Health, “This is something that we are seeing on college campuses across the nation. More and more students are bringing their animals to campus, and we have to update our codes to accommodate this. It isn’t a big issue…it’s not like we’re shutting it down. We just have to post a warning so that people understand that they are walking into an active farm.”

Some students are supportive of the reclassification of Spangler Hall. According to a student named Peggy,* “I’m so glad that we’re reclassifying one of our residence halls as a farm. It’s so inclusive! Everyone deserves a puppy when they’re busy all day from studying. I already have started breeding puppies to give to everyone on my floor.”

However, while some students see this as an effort to make college life a little easier, others see it as a hindrance to their college experience. A student named Ken* was unhappy with the loud noises that all the animals cause. “3 a.m.! That’s how early it was when I woke up last night. That stupid dog next door wouldn’t stop barking. I had a test tomorrow in my psychology class, but actually, I just had to go to a real psychologist,  because these noises are driving me crazy.”

The Office of Housing and Residence Life has reiterated that official university policy on this matter is not properly enforced between various offices. According to an anonymous official from the Office of Housing and Residence Life: “Officially at Saint Martin’s University, there are only two kinds of animals that are allowed on campus period. They are dogs and miniature donkeys. However, as an office we don’t really follow this and have expanded this to include just about anything.”

One student said that she is taking it a lot further. According to Bridgette*, “Cats, dogs, donkeys, heck someone across the hall from me is raising chickens in her room now. I think we should embrace this whole farm thing at Spangler and just build a stable outside.”

Indeed, Bridgette’s opinion has not gone unnoticed. The university has started the process of converting part of the parking lot outside of Spangler Hall into a stable.

“It’s going to take a lot of work. We’re talking about needing hay, water, a structure, and even food for all of these animals. Heck! Bon Ap is even saying that part of their contract requires that they be in charge of all of the food for these animals,” said a university official speaking under the condition of anonymity.

In the end, Spangler Farm is becoming a staple of campus. Other universities are looking to it as an example of what happens when rules are bent, and what can be achieved because of it.