Following the love and peace movements of the late ‘60s, the “hippie” style would begin to fade away,  leading into new types of rock music, such as punk rock, country rock, and glam rock, as well as disco, which swept most of the world by storm and created a huge boom in nightlife and dancing. The rise of synthesizers and harmonizers helped create a new electronic sound called synthpop. The ‘70s was the era of mustard yellows and browns and, the beginning of big hair and disco catsuits. The emergence of a new decade is often defined by its musical style. The ‘70s will always hold a very special place in my musical heart, as there is so much to choose from. Below are some of my favorite ‘70s artists and groups and a few of the songs that I believe defined the many new genres of music from the decade. 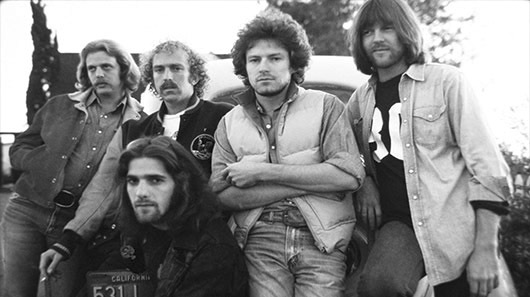 The Eagles saw a boom in success during the ‘70s, pumping out country rock and classic rock songs that many of us are still familiar with today. The Eagles enjoyed heavy popularity throughout the ‘70s. Formed in Los Angeles in 1971, the Eagles had an iconic sound that defined the country rock and rock genres for many music lovers. Their 1976 album “Hotel California,” blasted to the top of the charts, giving two number one singles, “Hotel California” and “New Kid in Town.”

My favorites from the Eagles: “Hotel California” “Take It Easy” “Life In The Fast Lane”

English group Electric Light Orchestra, ELO, blends modern rock with classical elements and futuristic sounds, using orchestral instruments like the cello and violin as well as synthetic sounds and the traditional rock guitar and drums. They produced 10 top singles in the ‘70s and ‘80s and group members Jeff Lynne, Roy Wood, Bev Bevan, and Richard Tandy were inducted into the Rock and Roll Hall of Fame in 2017. Their fourth album, a concept album, “Eldorado, A symphony” pushed the group into fame, becoming their first gold rated album, featuring the top hit “Can’t Get It Out Of My Head.”

My favorites from ELO: “Don’t Bring Me Down” “Livin’ Thing” “On The Run”

R&B superstar Marvin Gaye was extremely popular during the ‘70s. With the albums “Let’s Get It On” and “What’s Going On”, Gaye produced music in the classic R&B style, focusing on themes like love and relationships. He also sang about topics that were huge in the ‘70s, like equality, violence and many other types of social issues. His voice is very classic and defines the R&B scene of the ‘70s in every aspect. His music is soothing and great for slow dancing.

My favorites from Marvin Gaye: “Ain’t No Mountain High Enough” “Let’s Get It On” “What’s Going On”

An English rock band that formed in the early ‘60s, The Who began as The Detours, and evolved from a blending of the mod movement and pop art style. They are a classic example of ‘70s rock and remain a staple in my vinyl rotation at home. They have a unique, yet classic style and I enjoy almost all of their music. The band performed at Woodstock in the late ‘60s and had music heavily influenced by the teachings of Meher Baba, an Indian spiritual master who band member Pete Townshend followed heavily. There are definitely some “psychedelic” and spiritual themes in the music from this influence.

My favorites from The Who: “Baba O’Reilly” “Pinball Wizard” “Who Are You”

Earth, Wind & Fire produced music ranging from disco to pop, funk to jazz, and R&B to soul. They had many eclectic mashups of these genres and produced tons of jammable music that is still enjoyed to this day. Founded in Chicago in 1970 by Maurice White, the band has been nominated for 20 Grammy awards, 12 American Music Awards, 4 of which they won, and has sold over 90 million records putting them in the category of being one of the best-selling bands of all time. They were also inducted into the Rock and Roll Hall of Fame and the Vocal Group Hall of Fame.

“Riders on the Storm” by The Doors

“Ain’t No Sunshine” by Bill Withers

“A Horse With No Name” by America

“Gimmie Shelter” by The Rolling Stones

“(Sittin’ On) The Dock of The Bay” by Otis Redding

Last issue, we asked students and faculty to send in their favorite songs or artists to be featured in this issue. Here are the submissions we received.

“There’s A Riot” by Yo La Tengo. Submitted by Celeste Trimble.

“Great Mixtape” by Sampa the Great. Submitted by Celeste Trimble.

“Rewrite the Stars” from “The Greatest Showman” soundtrack. Submitted by Olivia Alvord.

“Derelicts” by Carbon Based Lifeforms. Submitted by Robert Bode.

“Vibes and Stuff” by A Tribe Called Quest. Submitted by Jeremy Newton.

“Sing About Me, I’m Dying of Thirst” by Kendrick Lamar. Submitted by Jeremy Newton.

“Sing Swan Song” by Can. Submitted by Jeremy Newton.

“Waterfalls” by The WLDLFE. Submitted by Sarah Page.