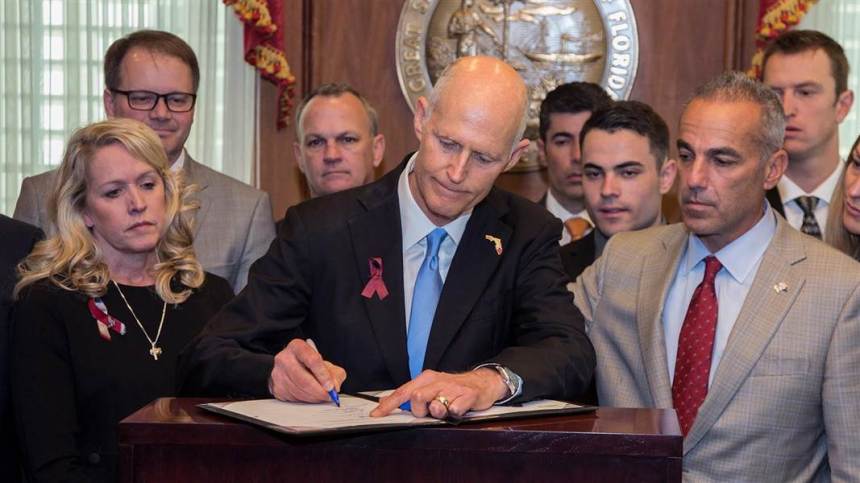 Gun control has been everywhere in the news this past month following the school shooting in Parkland, Fla. While many school shootings and mass shootings in the United States have gained short-term attention, students at Marjory Stoneman Douglass High School, organized by gun control activists nationwide, have been pushing for stricter gun control measures.

After the Parkland shooting, large protests were organized with the goal to put gun control measures on policymaker’s agendas. This led to a $400 million school safety bill that included gun provisions and ideas for school protection. The bill, which was recently signed by Governor Rick Scott, consists of provisions addressing gun control. These provisions include: raising the purchasing age to 21, creating a three-day waiting period on gun purchases, allowing trained school workers to carry firearms, banning bump stocks that allow guns to mimic fully automatic weapons, providing new mental health programs for schools, and restricting access to guns for individuals exhibiting signs of mental health issues or violence. The school safety bill intends to significantly decrease and possibly eradicate gun violence in the state of Florida. Governor Scott spoke of the bill as a balance between, “our individual rights with need for public safety.”

The school safety bill is incredibly controversial because of the country’s opposing opinions on the measures included in the bill. Some Democrats are speaking out on the bill by saying the bill is not doing enough to prevent gun violence, while some Republicans are saying that there are too many provisions. Some of the Parkland students are still fighting for a ban of semi-automatic weapons, as well as stricter rules as for who can own guns and how individuals can own weapons. The NRA, or the National Rifle Association, believes that the school safety bill has gone too far in restricting Americans’ second amendment rights. The NRA has gone on record announcing their dismay of the increased minimum age requirements and the three-day waiting period. The NRA has even filed a lawsuit against Florida stating that raising the minimum age is “…a blatant violation of the Second Amendment.”

Even though Florida Governor Scott signed the bill, counties do not need to comply with a specific part of it. The “guardian” program that provides the opportunity for teachers and other school employees to carry handguns upon the completion of law enforcement training, is optional for counties to follow. Each county is able to make their own decision on whether or not they feel comfortable allowing teachers to carry guns in the classroom. Many counties in Florida have already announced that they will not be following along with that section of the bill.

Overall, the debates over the school safety bill have been intense and never-ending since the bill was proposed. Like any other proposed bill or law, citizens will have strong opposition or support, necessary for any healthy democracy.