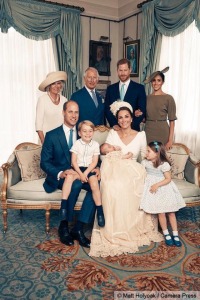 This year has been a significant year for Britain’s beloved royal family. In April, the Duke and Duchess of Cambridge welcomed their third child, Prince Louis to the family. Louis, the second son and youngest of the royal family, is fifth in line for the throne behind his grandfather, Prince Charles, his father Prince William, and his brother and sister. His christening, which took place on July 9, was held in the chapel at St. James’s Palace, and was attended by close family and friends.

His two siblings, Prince George (5) and Princess Charlotte (3) also had a busy year. Both have been involved in three weddings in 2018 as a page boy and bridesmaid, that of their uncle Prince Harry, their father’s cousin, Princess Eugenie, and Sophie Carter, a close friend of their mother. In addition to their involvement at a multitude of family functions, the prince and princess both started school in early September; George starting his second year at Thomas’s Battersea and Charlotte at Willcocks Nursery School. Although charmed by their first day of school photos in 2017, the world will not be seeing any snapshots of the children every year, says People magazine, because of their parents’ wishes to keep the prince and princess’s lives as private as possible.

Another royal baby is on the way, but this time, the Duke and Duchess of Sussex are the expectant parents. Prince Harry and Meghan Markle, who married in May this year, announced the spring arrival of their first child on Oct. 15. Harry, who spoke at the Invictus Games Opening Ceremony on Oct. 20, referenced his excitement for the big news. “First of all, thank you for the welcome you have given Meghan and I over the last few days,” he stated, “I have been so proud to be able to introduce my wife to you and we have been so happy to be able to celebrate the personal joy of our newest addition with you all.” The Invictus Games, held in Sydney, Australia is a special event for the royal couple, as it was the first place they made their official debut as a couple last year, according to People.

In addition to Harry and Meghan’s wedding this past spring, the Royal Family celebrated another wedding in October, this time for Princess Eugenie. Eugenie, the daughter of Prince Andrew, the Queen’s second son, married her boyfriend of seven years, Jack Brooksbank in St. George’s Chapel at Windsor Castle, the traditional wedding venue for the royal family. Diagnosed with scoliosis as a child and undergoing surgery at the age of 12, the princess chose to reveal her back scar in her glamorous 1940s style wedding dress, stating that this purposeful choice was made to hopefully change the public’s perception of beauty, according to Cosmopolitan. Known for her humanitarian work against human trafficking and modern slavery and abuse, Eugenie and her fiancé choose to incorporate one of her many charities in their wedding, handing out goodies bags to the wedding guests put together by Women’s Interlink Foundation.

The Royal Family has not disappointed the public in 2018, with exciting developments and a barrage of photos to satisfy their devotee’s adoration for their lifestyle, day-to-day activities, and public service.