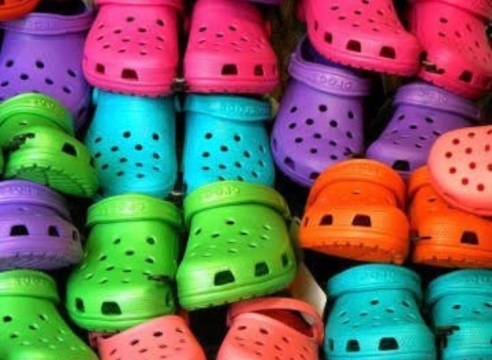 Crocs have always been a fashion statement, and whether that is a good or bad thing depends on your personal style and preference. From the beginning, the shoe brand has always been the kind of thing that people either love or hate. Since the creation of Crocs in 2002, they have been labeled as the kind of shoe that your mom thinks are a “fashion staple,” and because of this, she made sure that you own a pair “just in case.” When I was younger, I always wondered when the day would come where I would need my own pair of Crocs. Eventually, I ended up using them when I was camping one summer. Don’t get me wrong, they were “kinda-sorta” comfy in a weird, rubbery way and convenient slip-ons, but I hated them nonetheless. I wore them out of convenience, but not without complaint and only for a short period.

Since their comeback, because everything eventually comes back in style, there have been adjustments made to the traditional Crocs. Designers have upped the ante with fur-lined, open-toed, and even platform styles. The new and improved platform croc has since been the talk of the town; Independent.co.uk commented on this transition by saying, “the world’s ugliest shoe just got a high-fashion makeover.” This “high-end” version of the croc is now considered a staple piece of street style. They also said, “once upon a time the fashion crowd may have dismissed them as sartorial suicide, but now they are regarded as the shoe of the future.” This image of the “shoe of the future” could be because of how versatile the various versions are, and the dual-purposes that each provides. Some people, including sophomore Tyler Patches, prefer the croc in its original form, including its original price, “I have been searching for the perfect pair to add to my collection but they are so expensive. I use to get them for $10 at Walmart, but now they are $35. I use to be able to rebuy a new pair all the time when mine would accidentally break, but now I can’t because the price is too high.” It is possible that Crocs have gained enough popularity for even the “knock-off” versions to rise in price, or the price increase could simply be caused by inflation.

Other people, including junior Andrew Garcia, have always hated them. “They are terrible. If I wanted holes in my shoes, I would make them myself.” Then there are others who are in the middle with the “evolution of the croc.” Junior, Gabrielle McClure, provided her thoughts on this trend: “Naturally, I hate them and they look hideous with or without socks. But, I absolutely adore them as well. I miss the days when you could grab them in the store and they had racks of pins you could shove into the holes to bedazzle them. I don’t think they could ever be a trend again, but whenever someone wears them, they get noticed. It is part of the shoe’s charm–that early 2000s look. So yes, I would wear them again but they would have to have the cool button attachments or it wouldn’t be worth the struggle.”

Crocs have come a long way since their creation almost two decades ago. Once a staple for nurses, young kids, and active gardeners, Crocs have transitioned into a fashion statement piece. Despite this, they will always remain the kind of style that you either love or hate.