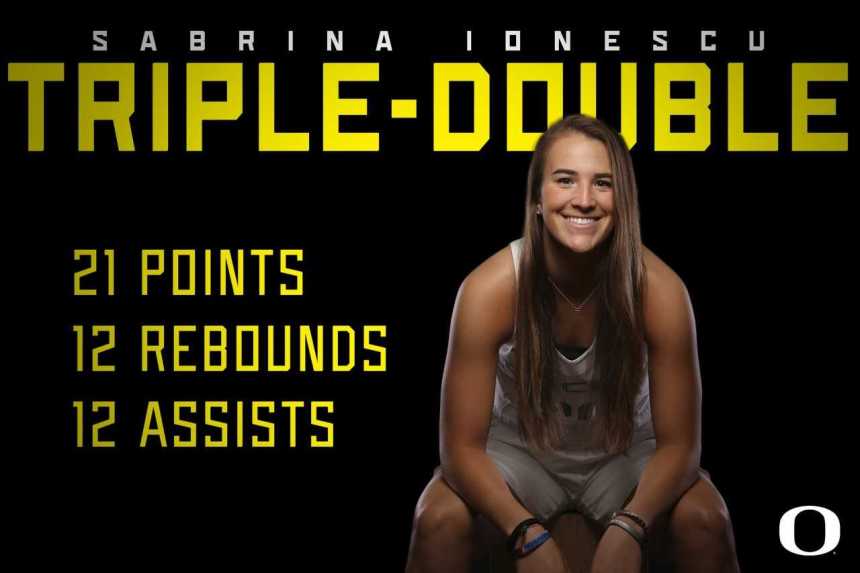 Bazooka Mode. The nickname that Oregon Women’s Basketball player Sabrina Ionescu has been dubbed. The 5’11” guard is even drawing comparisons to a female version of Michael Jordan, and for good reason. Ionescu and the Ducks sit alone at the top of the Pac-12, with a cool 8-0 record in conference play, with her leading the charge. According to an article from the Bleacher Report written about Ionescu, she is just as nervous as her peers, yet one thing is different: “She’ll be energetic and confident. Ready. Every time. She has to be. She is the woman who does not miss. The ‘Triple-Double Queen.’ Her teammates need her. Follow her. Copy her. If she flinches, they flinch. If she doubts, they doubt.” She is the team leader, and her teammates rely on her.

Ionescu may seem calm, cool, and collected, but for the future No. 1 WNBA pick, she is anything but that. The night prior to every game, she often can’t sleep, and will stay up past 2 a.m., stating, “I’m just super nervous before games.” It is surprising to see that even the best athletes in their respective sports get just as nervous as any other athlete. However, Ionescu isn’t afraid to hide the fact that she feels like vomiting because of how nervous she is before each game.

In the past, getting the triple-double in a game was regarded as a great feat in basketball, similar to getting the highest batting average in the game in baseball. Yet, both are now “old” statistics. Russell Westbrook has averaged a triple-double in the past two seasons, and has only won one MVP award. If he was living 20 years ago with those stats, he’d be an MVP machine. So, what changed? Well, for Westbrook, he takes a lot of shots each night, and misses a lot of those shots. For Ionescu, she has earned 16 triple-doubles this year. She leads the country in both men’s and women’s basketball in that category and has already set a new NCAA record. The stats may seem skewed to a lot of analysts, yet that doesn’t change how great of a player she is.

For the guard, this may be her last season with the Ducks if she opts to enter the draft as a junior. Who knows what the rest of this historic year has in store for the number four ranked team in the country? With a guard who is always ready to step into the spotlight, the future of this Oregon team seems promising.