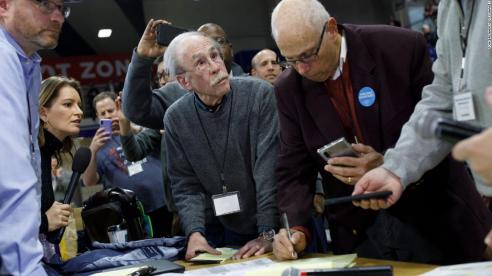 Iowa’s kick-off of the democratic nominating contests for the 2020 presidential election made the rest of the nation ask- for perhaps the first time ever- “What’s going on in Iowa?”

As the first state of every election to hold a caucus or primary, Iowa residents have spent the last several weeks discussing issues, holding meetings, and diligently planning the endorsement of a Democratic candidate to run against President Donald Trump. Rather than voting for a preferred candidate, caucus-goers attend public meetings in person, and select their preferred presidential nominee.

Though most state and territorial Democratic parties will hold primary elections to select their presidential candidate, Iowa is one of 10 states and three territories that uses the caucus system.

The 2020 caucuses, however, held several surprises for Iowa Democrats, most notably 2020 saw the introduction of “virtual caucuses,” rather than just attending public forums. Participants were able to vote via smart devices, which later account for 10 percent of Iowa’s delegate votes.

Iowa Democrat Party Chair, Troy Price, made the following statement in a press release regarding the historic change: “The Iowa Democratic Party has always sought ways to improve our caucus process, and today, we are setting the stage for the 2020 Iowa caucuses to be the most accessible, transparent, and successful caucuses in our party’s history…while we will always continue to improve the caucuses, I am confident that with these historic changes, we are giving more Iowans a way to participate in the caucuses, we are increasing transparency and trust, and we are streamlining our process.”

Yet, the 2020 caucuses were anything but smooth. As thousands logged onto the new app on Feb. 3 to choose a candidate, the system crashed, causing participants to turn to their phones. Unfortunately, this caused phone lines to experience severe back ups which prevented precincts from collecting results for hours.

Both campaigns and news organizations reporting the outcomes were left without results, causing some candidates to speculate about the alleged outcome.

According to CNN, the unfortunate mishap affected the results of over 1,700 precincts. Though precinct captains all over the state noticed flaws in the app days before, this type of result was not anticipated by anyone. The day ended with the results being both unreported and undetermined because of the ill and underprepared caucus workers.

Unreported precincts were made to recount and distribute results, a process which extended the release of official results for two days. Party leaders have assured voters that the malfunction of the app did not inaccurately report results; however, it did prevent a confused and frustrated public from participating in a supposedly “smoother and more accurate process.”

By the evening of Feb. 7, Pete Buttigieg claimed the most delegates, capturing 26.2 percent, and followed closely by Bernie Sanders with 26.1 percent. Third and fourth place trailed a little farther behind, with Elizabeth Warren taking only 18.0 percent, and Joe Biden coming in at 15.8 percent of the total delegates.

Results were released on a rolling basis following the egregious technical error. While it is unlikely that the results will change, the unusual nature of this caucus has put other states on edge.

After such a catastrophe, other voters may be wondering– does Iowa really matter? While Iowa alone will not decide the fate of the nation, its first-in-the-nation status is significant. Generally speaking, the results of the Iowa caucus indicate the preference of the common people, as well as predict future outcomes of upcoming caucuses and primaries.