The anecdotes of a teacher, monk, student, and supporter: Father Kilian 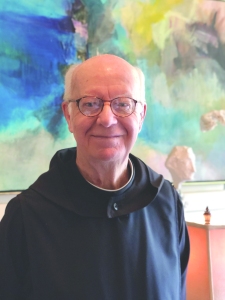 Over the 125 years since Saint Martin’s was founded, more than half  have had the radiant presence of Fr. Kilian Malvey. Moving to Saint Martin’s in 1952, the monk had only positive anecdotes and fond memories during his decades at the institution.

For one, Fr. Kilian reflected on the structural changes that have occurred on campus. Saint Martin’s University, formerly Saint Martin’s College, also included an all-boys high school in addition to a college. Both schools, dorms, monastery, and cafeteria were all combined in the building currently known as Old Main.

“I was in the freshman-sophomore dorm which had 50 bunk beds,” Fr. Kilian recalled. Despite all college offices, classes, and living spaces being located in the same building, the community was intimate enough to convey a communal spirit.

“You never got the sense that it was crowded,” he said, though noted that a shared living space and even a communal shower was pretty normal at the time.

The first expansion of the school came with the addition of several Quonset huts down the hill, which served as the bookstore, recreational building, movie theater, and various other living spaces. As enrollment continued to grow, the school constructed Baran Hall to meet the demands of its residents.

“It was a big, big deal,” Fr. Kilian explained, “There was nothing down there just the woods and cow pastures.”

The school has experienced so many changes, described Fr. Kilian, saying that students returning to Saint Martin’s for the anniversary celebrations were completely astounded by the entirely transformed grounds, even getting lost on a campus that they had once attended for four years.

However, to his account, the biggest and most impactful change, was the introduction of women on campus. Saint Martin’s officially became a co-ed school in 1965, which he described as not only being a time of community expansion, but also a time that helped expand the minds of those already in the community.

“Being a small-ish, all-male college/all-male high school, there’s kind of an ‘inbreeding’ that you don’t look beyond, and you make a lot of assumptions. When the women came on campus, they brought a whole new, fresh spirit to the campus. I thought that was wonderful.”

Fr. Kilian continued to describe many other individuals who have impacted the campus and Saint Martin’s community during his years as a member. Mike Contris, an English professor and close friend left a lasting impression on him personally, as well as on the campus community. During this year’s annual scholarship banquet, four of Contris’ sons attended the event in support of their father’s legacy and the current students of Saint Martin’s.

“When he was teaching here with me, we were the only two people in [the] English [department], and his sons were just little kids—two and three years old, running up and down the hallway…and now they’re all grandfathers!” Fr. Kilian said about Contris.

He also described David Spangler as having a steady and reassuring presence on campus. Spangler, who served as university president over several decades, assisted in expanding the variety of undergraduate and master’s programs on campus, as well as the Office of International Programs and Development. Students acquainted with the Les Bailey Writers Series are well aware of the impact of faculty like Les Bailey, whom Fr. Kilian and many other current Saint Martin’s faculty remember fondly.

While Fr. Kilian shared his positive memories of Saint Martin’s past, he also expressed his hopes for the future of the university.

“I hope that we don’t get too much bigger. I hope that we become more sharply aware of our Catholic Benedictine heritage. And that we become a strong academic institution that provides the very education for our students,” he said, “Catholic intellectual tradition is such a powerful foundation.”

He also expressed that he hoped Saint Martin’s will become a place of social, economic justice, promoting the Benedictine values in a way that clearly differentiates us from larger state schools. “We have an obligation to help our students graduate and become people who can better and live their lives peacefully, joyfully, and selflessly,” he concluded. And just as he has contributed to the lives of countless students throughout the years, Fr. Kilian communicated his hope for current students to gain joy and wisdom from their experience, whether or not they spend four years on campus, or 68.