Brady to Tampa and other NFL free agency news 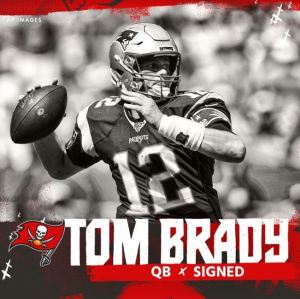 The sports world has come to a standstill as many different sport leagues postpone or cancel their seasons. However, NFL Free Agency has started off with some unexpected contracts. As of March 21, there are some interesting players ranking in the top five of available free agents, as well as the top five free agent contracts that have been signed. One of the most unexpected signings was that of Tom Brady to the Tampa Bay Buccaneers.

According to Pete Prisco on CBS Sports, the top five available free agents are: Seattle’s own Jadeveon Clowney, the Buccaneers’ Jameis Winston, Robby Anderson of the New York Jets, Breshad Perriman, another Buccaneer, and the Titans’ Logan Ryan. Currently, Jadeveon Clowney is the number one free agent and is asking for around $22 million per year for his new contract. Prisco, as well as Bryant McFadden, a CBS Sports analyst, found that Clowney will not be getting that much. Both Prisco and McFadden agree that Clowney has been incredibly injury prone, making 22 million a risky amount for any team to give. Clowney will most likely land with the Seahawks or Giants. In Seattle, the team would have a better understanding of Clowney’s health and injuries. However, with the Giants, Clowney would be able to excel as the excellent run stopping player that he is.

Quarterback Jameis Winston will have to look beyond his own team for a spot to play, since they signed Tom Brady. Winston is the first quarterback to throw 450 plus yards in consecutive games, making him the second most notable free agent. The Patriots and the Chargers need starting quarterbacks, making them two viable options for Winston.

Taking up the third best free agent position is wide receiver Robby Anderson of the Jets. This year, teams are desperate for wide receivers, giving Anderson a great opportunity to find a new team. Anderson is one of the best deep-ball wide receivers with 52 catches, 779 yards, and five touchdowns from last season. This gives Anderson some serious powerhouse teams to land with, such as the Vikings, Saints, or Packers.

The fourth best agent, Breshad Perriman, found his flow in the 2019 season. Perriman brought in 36 catches, 645 yards, and six touchdowns. According to CBS Sports, Perriman’s speed and power would add a great component to the Eagles’ offense, making that a potential landing spot.

Bringing up the end of the top five free agent picks is cornerback Logan Ryan, who would be a great choice for any team wishing to strengthen their secondary. As CBS Sports puts it, “Teams that couldn’t get Darius Slay should take a look at Ryan.” Even though 2019 might not have been his best year, Ryan is a reliable player that greatest potential lies with the Cowboys, Giants, or the Bears.

One of the most unexpected contracts was that of Patriots’ starting quarterback, Tom Brady, who had played for twenty seasons with the New England Patriots. This year, for the first time in twenty years, Brady was an open free agent, and the Buccaneers won his favor. There had been several accusations that Brady only signed because the Buccaneers were willing to give Brady control over the team roster.

However, according to CBS Sports’ Patrick Walker, Brady had merely asked for the phone numbers of each of the players on the team, rather than any control. When Brady posted on Instagram about his switch to Tampa Bay, there was an energy for something new in his words.

Brady wrote, “I’m starting a new football journey and thankful for the @buccaneers for giving me an opportunity to do what I love to do. I look forward to meeting all my new teammates and coaches and proving to them that they can believe and trust in me…”

With his genuine love for football and his new teammates, it will be interesting to see what kind of a team Brady can bring together in his next two years with the Tampa Bay Buccaneers.