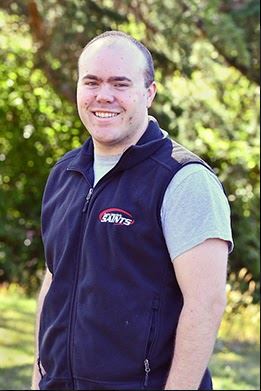 Recreational activity has been a huge passion for most of Crawford’s life. Before coming to Saint Martin’s, Crawford had worked at many athletic camps throughout high school and college. While working to get his master’s degree at George Williams College at Aurora University, Crawford started to get involved working in recreational activities.

Recreational activity was not the first career field that Crawford had in mind when he entered college.

“I didn’t even know it could necessarily be a major,” he said.

Crawford said that getting a job in teaching is what he originally had in mind, while being on a music scholarship. In college, Crawford played trumpet in the concert and marching bands. He somehow stumbled into the field of athletics during his freshman year, while trying to figure out what career path he would take for his future. Crawford said that one day in class, the Head of the Recreation Department had come to talk about what the career field was. Because some of his favorite activities included backpacking with his family and being in the Boy Scouts, he found a strong interest in the recreational activity career field. As he kept on pursuing the field, his interest evolved into different opportunities just by being open to new activities.

Before getting his masters, Crawford worked retail at a sporting goods store. While in college, Crawford interned in Canada with Beyond Malibu Young Life, a program which focuses on changing young lives through wilderness adventure ministry. The year after that, Crawford was involved in an internship in Japan to work on recreational programming with the Navy. Crawford has also worked for the U.S. Army at Joint Base Lewis McChord.

When asked about his favorite recreational activity on campus, Crawford said, “I’m kind of a little bit of everything, but as of the last number of years, my favorite activity has been floorball.”

Crawford has enjoyed floorball so much that he has started a business named Floorball Guru dedicated to the sport. This business is built around educating people about the sport of floorball across the United States, and around the world.

“I think we’re seeing good engagement with students with our [floorball] games” he stated. In the local area, Crawford teaches youth classes and developed a league to get more youth involved and active in the sport. Crawford has also published a book called “Floorball Guru Primer” which is available at the O’Grady library and on the Floorball Guru website, which was written as a resource for people to better understand the sport.

“All that stuff has just become a part of my daily life working at the [recreation center] and then at night do something totally different but then melding all of that stuff together,” he described.

Because of the many different opportunities of trips to go on, Crawford says he cannot make up his mind on his favorite trip, and said, “It kind of varies depending on what’s going on.

I’m like the jack of all trades but master of none. I like going out and doing different things but for me, the difference is more based on experience.”

An example he gives is his enjoyment for white water rafting because it brings him back to good memories of when he was a raft guide in training. Snowshoeing, climbing the Ape Caves, and paintballing are some other trips Crawford enjoys.

“I built the SOAR program when I first got here to be the introductory get you in the door to experience [the activity] and to encourage you to keep going with it. To me the SOAR program is not the end game it’s the beginning to get you into it.”

Because of the current happenings of gyms and recreation centers temporarily closing due to the spread of COVID-19, Crawford has offered some tips on how to stay fit, healthy, and happy. He said that anything that keeps one’s body moving is important. The key for any workout program is consistency.

“If consistency means you go for a walk for 30-45 minutes every day, then awesome. If you want to do a hard core at home workout kind of thing, great.”

Another important thing people struggle with is creating normalcy. Examples include getting up at the same time they would otherwise, doing online class work on a normal schedule, spending time with people in a way that follows the guidelines of social distancing, and reaching out to people one might not have seen in a while to keep those connections going. Look for the good happening on and off campus as a reminder that although things right now are tough, things right now will not be forever. Having those positive thoughts and doing those activities can help people a lot.