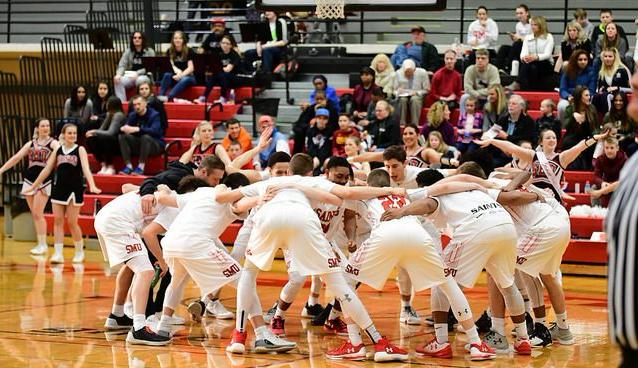 This season, the Saints men’s basketball competed in the GNAC Championship game for the first time in the school’s history where they took second place. Once again for the first time, the Saints were picked for the NCAA Selection Show, being tabbed as the fifth seed in the West Regional, facing four seed Cal Poly Pomona in the first round. They entered the tournament with a 24-7 record. Their season came to an end during the second round of the tournament against Western Oregon University. Luke Chavez was named newcomer of the year, first-team All-Conference, named to the D2CCA West Region Team and also voted to the NABC First Team All-Region Team.

“This is a very confident group. We were battle tested with a lot of close games in the GNAC play, so I think they were really looking forward to the opportunity to prove themselves in post season play. They were focused, confident in each other, and prepared to play their best.” Stated Coach Alex Pribble.

The Saints started the GNAC Championships against Central Washington University (CWU) during the quarterfinals where they won with 87-84 in overtime. Junior EJ Boyce led the team with 15 points, along with five rebounds and six assists. Freshman BJ Standley followed close behind with 13 points off the bench while junior Luke Chavez and Jordan Kitchen each added 12 points. The Saints had an impressive 14-point lead in the second half, but a seven minute stretch without a field goal allowed CWU to tie the game which forced the teams into overtime with a score of 76-76. SMU held the lead for the majority of the game but the Wildcats continued to chip away the lead until the final minutes tying the game with seven seconds left. Central’s first lead of the game came 37 seconds into overtime. Back and forth the game went until they were tied at 81-81 with 1:30 left. Finishing strong with a dunk from Kitchen, three free throws from Rhett Baerlocher, great defense and another free throw from Boyce sent the Saints into the semi-finals with a 3-point win.

SMU then turned around to play longtime rival Western Washington University (WWU) the next day where they walked away with a 69-68 win. Chavez led the Saints in scoring with 20 points, shooting 8-for-16 from the field and 3-of-6 beyond the arc. Standley and Boyce also reached double-digits, combining for 21 points and six assists. Senior Matt Dahlen finished the game with six points, 10 rebounds and three assists. Once again, the Saints led for most of the game which included a 15-point lead in the first half. WWU brought consistent offensive and defensive pressure which brought the game to a 67-67 tie in the final minute. In the last few seconds, WWU drove down the court toward the basket where an offensive foul was charged against them. Unfortunately, the call was overturned and changed to a blocking foul against SMU. The Vikings were sent to the line with 4.9 seconds left where their player missed the first shot but sunk the second putting them in the lead with the score at 67-68. In the last play of the game, Standly sent a floater over two defenders to Chavez at half court who dribbled to the top of the paint. Chavez pulled up and hit the game winning 15-footer with 2.1 seconds left on the clock sending the Saints to the GNAC Championships for the first time in school history.

The Saints played first seed and nationally ranked Western Oregon University (WOU) in the GNAC Championship game. Boyce and Chavez ended the game in double-digits, with 11 points each. Freshman Tavion Henderson and Standley added seven points each off the bench. Kitchen and Dahlen finished with a combined 12 points and 13 rebounds. As a team, Saint Martin’s shot 18-for-58 (28.0 percent) from the field, 4-for-20 (20.0 percent) beyond the arc, and 15-for-19 (78.9 percent) at the free throw line. The Saints recorded 31 rebounds, 14 assists on only nine turnovers, along with nine steals and four blocks. During the first half, both teams were evenly matched with neither team leading by more than 6 points. WOU took advantage of the struggling 3-point attempts by Saints who only shot 20 percent for the game. SMU went into halftime down by four after a back and forth first half. The Saints struggled to find an offensive rhythm while they only scored 2 points in the first 5 minutes. Western Oregon took advantage and found themselves with a 13-point lead. The Wolves defense held strong where they limited the Saints shots and eventually were able to claim the GNAC title with a 10-point lead, finishing the game at 55-65.

For the first round of the NCAA tournament, the Saints faced Cal Poly Pomona where they walked of the court with a 66-58 win. Boyce led with 19 points while Chavez added 16 points, and both combined for seven rebounds and five assists. Dahlen and Baerlocher each ended with eight points while Standley, Mathews and Henderson combined for 13 points, 14 rebounds, and six assists. The Saints as a team shot 20-for-44 (45.5 percent) from the field, 9-for-20 (45.0 percent) beyond the arc, and 17-for-26 (65.4 percent) from the free throw line. The Saints recorded 37 rebounds, 12 assists, 16 turnovers, four steals and three blocks. SMU were able to hold Pomona with a 9-point lead going into half time. Boyce was able to increase their lead to 15 by hitting his fifth 3-pointer of the game which helped push the scored to 50-32 with 10 minutes left. Pomona came back with a burst of energy, cutting the Saints lead down to 5 points. The Saints were able to seal their victory with free throws during the final minute of the game.

The men’s amazing season came to an end in the second round of the NCAA tournament against GNAC Champions, Western Oregon. Chavez led with 17 points, shooting 6-for-13 from the field and 3-for-6 beyond the arc. Baerlocher added eight points and five rebounds. In his final game of his collegiate career, Matt Dahlen finished with 11 points, two rebounds and two assists. The team shot 22-for-49 (44.9 percent) from the field, 5-for-18 (27.8 percent) beyond the arc, and 6-for-8 (75.0 percent) at the free throw line. The Saints recorded 23 rebounds, seven assists on 14 turnovers, along with four steals and one block. For the fourth time this season, the Wolves came out with a victory after a tough fought battle at Western Oregon. While the Saints held back the Wolves shooting, the second half Western hit eight 3-pointers which dominated the board, sealing their fourth victory. Both teams struggled with turnovers throughout the game giving each other open offensive opportunities. The teams went into halftime with Western leading 21-19. The Wolves gained their largest lead of the game with a 10-2 run making the score 31-22. Chavez stopped the attack with three points which propelled the Saints to chip away at the Wolves lead. Western responded with 10 points in the next four minutes giving them a 45-33 lead. They found their offensive rhythm in the last few minutes which resulted in their 77-55 win over the Saints.

Pribble stated, “It was an emotional locker room after the final loss of the season, as you’d expect. These players and coaches put a lot of hard work and heart into the season, and when it comes to an end it’s sad, especially when you think about our senior Matt Dahlen. That doesn’t take anything away from the historical season we had, but the final game was definitely emotional. There are so many great memories from this season that will stick with me, but if I had to pick a favorite it would be seeing our players walk over to the Saints crowd after our win in the NCAA tournament. We had incredible support all year long, and watching our players celebrate with the community after the school’s first NCAA tournament victory – well that was as special as it gets.”