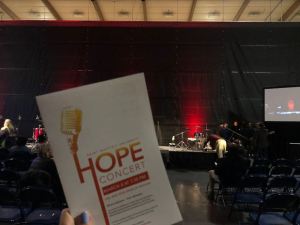 On March 4, 2020, the Marcus Pavilion was transformed from a sporting arena to a stage for the arts. The celebration of music featured Saint Martin’s very own chorale, directed by Darrell Born and accompanied by Nickolas Carlson, and Jazz band, directed by Brad Schrandt. The night featured music groups, soloists, duets, and bands. The songs that had been chosen were meant to bring hope in today’s world. All performances were emotional, light, and inspirational for all in attendance.

The chorale, made up of about 50 students and faculty, split into four major voice parts that joined together harmoniously into cohesive pieces, which brought awe. For the first time ever, Saint Martin’s very own Jazz band performed in the annual Hope Concert. The group featured seven students and one faculty member performing in the middle of the concert, and had everyone in the room moving to the jazzy beat of their tunes.

Throughout the night, student soloists, duets, and bands were featured. Prior to the concert, students auditioned and worked closely with Born and Carlson to ensure that each performance went smoothly. Their hard work showed as they all sounded fantastic. The performance pieces included traditional folk songs, personal compositions, musical theater/show tune favorites, classic rock, and metal. Students not only sang, but also accompanied each other on drums, bass, and guitar, forming exceptional ensembles .

The Hope Concert is traditionally a free concert with donations being greatly appreciated. Every year, the Fine Arts department chooses a hopeful cause to donate voluntary proceeds to. This year, the proceeds went directly towards Saint Martin’s students participating in alternative spring break trips in Flint, Michigan and McAllen, Texas. Student representatives spoke at the concert to give their personal service experiences and what they hope to gain on their respective trips.

Those in attendance were faculty, staff, students, families, and friends. Gabrielle Bond, a Saint Martin’s student, noted that this year’s concert was the first performance she had attended during her time at the university. Bond noted that the concert brought a sense of peace. Every song gave  her a feeling of warmth, and once the concert was over, she felt uplifted. As the concert fell in the middle of midterms, Bond stated that although she had a stressful week, the concert was a wonderful gift and she was extremely thankful for performers for giving of their time and talents to showcase that evening. She also stated, “I have friends who perform and I’m so proud and I want to hug the people I don’t know because they are just so talented.”

Another student, Christopher Gizinski, had a similar experience to Bond, as it was also his first time attending a Saint Martin’s concert. He said that the concert brought him a sense of relief and a nice break from schoolwork. Bond and Gizinski both said that it was a wonderful experience and they are extremely impressed with the amount of work that was put into the evening. They  are both looking forward to more concerts and performances held by the school in the future.

The concert concluded with a chorale tradition of Revelation 19 – a staple song for the Choir where all those who have previously participated in the chorale are invited up to the front to sing in unison with the group.

Preservation of the arts is so important and Saint Martin’s Fine Arts department does wonders with all they do on campus and in the greater community. Make sure to keep an eye out for any other Chorale, Jazz Band, and Wind Ensemble performances, because you will not want to miss it. To all those who participated in the concert, congratulations on another exceptional performance, Bravi Tutti.